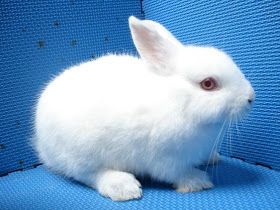 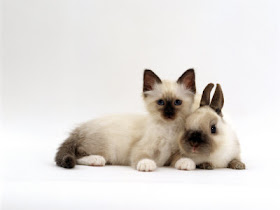 The Netherland Dwarf breed was first produced in the Netherlands in the early 20th century. Small Polish rabbits were bred with smaller wild rabbits; after several generations the resulting animal was a very small domestic rabbit available in a wide variety of colors and patterns. Netherland Dwarfs were first imported into the United Kingdom in 1948 In the 1960s and 1970s the United States imported its first Netherland Dwarf rabbits The first dwarf rabbits behaved more like these wild rabbits than domestic animals and were not good pets. However, through generations of selective breeding, the modern Netherland Dwarf has become a gentle, friendly pet rabbit, though it still retains a more energetic disposition than larger breeds.Dwarf crosses frequently retain some of these characteristics, depending on the breed the dwarf is crossed with. 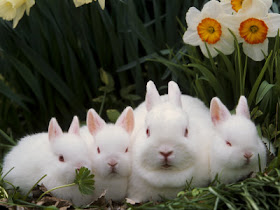 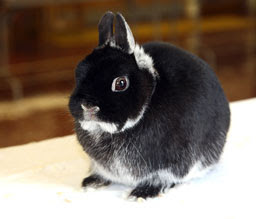 Netherland Dwarfs have a reputation of being skittish, wild, and/or of poor temperament. This has changed through selective breeding, making Dwarfs a docile breed. In general, the Netherland Dwarf is curious and gentle. A well-bred Netherland Dwarf makes an excellent pet for both adults and children. Like other domestic rabbits, dwarf rabbits have a sensitive digestive system that is less hardy than their wild rabbit cousins, and leafy vegetables such as lettuce and cabbage can give them health problems, such as diarrhea, if fed in excess. Netherland Dwarfs have a digestive system even more sensitive than most breeds. The best diet consists of fresh, good quality rabbit pellets fed in limited amounts. The National Research Council lists minimum rabbit nutrient requirements for a maintenance diet as 14% crude fiber, 2% fat, and 12% protein. Netherland Dwarfs generally don't require much feed. Rabbit breeds derived from breeding larger rabbits with the Netherland dwarf are known as dwarf breeds. Generally dwarf breeds are slightly larger than the typical Netherland dwarf, not growing larger than 4 to 5 lb (1.8 to 2.3 kg).Most have shortened faces compared to larger rabbits, and some even preserve the rounded head, large eyes, or small ears of the Netherland dwarf.These features make them look little. 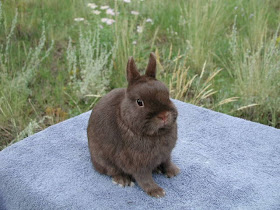 Most dwarf breeds are intended to bring a specialized characteristic, such as a specific fur type, into a smaller rabbit. Mini-Rex were created through the breeding of dwarfs with Rex rabbits, a fur breed with a short, plush coat, and retain both the dwarf's size and the Rex fur. Jersey Woolies are a dwarf version of the Angora rabbit, a wool-producing breed. Lop-eared rabbit breeds, interbred with dwarfs, were used to create Holland Lop. Despite its name, the Mini Lop is not a dwarf breed. If two true dwarfs are bred, the statistical result will be 25% fatal 25% false, and 50% true. "False Dwarfs" tend to have longer bodies, longer/larger ears, longer faces, and are often heavier than the 2.5 pound maximum weight for showing. It is common practice amongst Netherland Dwarf breeders to breed a proven show quality true dwarf buck to a quality false dwarf doe. This eliminates the chance of peanuts and yields quality offspring. The chances of false dwarfs is higher, but those offspring generally go toward breeding (some false dwarf bucks have proven themselves valuable to a breeding program) or are sold as pets.
Share
‹
›
Home
View web version